What to do when the integration doesn't seem to be working as expected.

Written by Jeffrey Meese
Updated over a week ago

Editing an order on OrderEZ

When does the order from OrderEZ gets synced to Xero as draft bills to pay?

Your orders are synced to Xero only after your Supplier has accepted/partially accepted the order. These orders will be created as a draft Bill to Pay, hence allowing you to check and approve only when the bill is ready to be paid.

My order has been accepted by my Supplier, but I do not see the draft bill in Xero.

If you do not find a corresponding bill to pay Xero, you can open the order on OrderEZ to manually push the info to create the bill to pay. 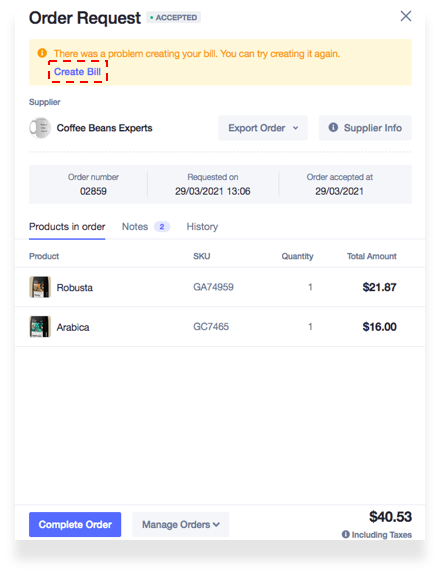 My Supplier has accepted my order, unfortunately, I need to cancel the order.

I have attached a picture of my Supplier invoice to the corresponding order on OrderEZ. Will the picture be synced to Xero as well? 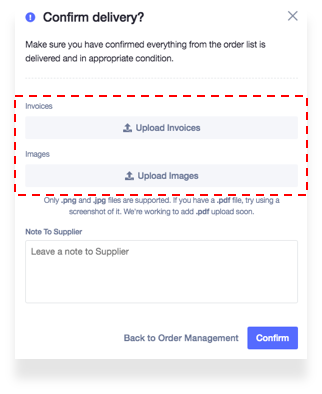 Do note that pictures uploaded to "Invoices" will be sync to Xero. Picture uploaded to "Images" will only appear under the "Notes" tab of the order.

Will my offline orders be synced to Xero as draft bills too?

Yes, offline orders will also be synced to Xero. Since offline orders have the "Completed" status, you will immediately see the draft bills in your Xero account after you update them.

What about the picture of the supplier invoice? Will it be attached to the draft bills to pay in Xero as well?

Most definitely! It works the same as normal orders placed in OrderEZ.

Will the orders entered on my behalf by Suppliers be synced to Xero as well?

Orders entered on your behalf by your Suppliers will have a "Pending" status. Upon acceptance by your Supplier, the corresponding draft bill to pay will be created in your Xero account immediately.

Editing an order on OrderEZ

What happens when I edit an accepted order in OrderEZ? Will the change be reflected on the draft invoice in Xero?

Yes, changes made to an accepted order will also be updated in the corresponding draft bills to pay in Xero.

What happens when my supplier edits an accepted order in OrderEZ?

Similarly, if your supplier made changes to an accepted order, the draft bills to pay in Xero will be updated accordingly as well.

Did this answer your question?